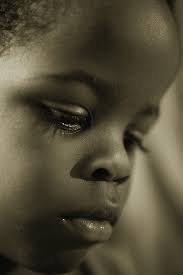 Today my heart was broken. Maybe, saying that it was broken doesn’t do justice for the state of my being. Today my heart was shattered. A black man stated that it is more important for him to keep his daughter closer than it is for him to do with his son because “women are weak”. He stated that women look for this absent father figure in men they date and make a mess of their lives. However, he feels as though black boys are strong and they can be okay without their fathers. I believe I can accurately quote him saying “I didn’t have my father in my life and I’m fine.” Which leads me to ask to very simple questions. What is weak? And what is fine?

Realistically speaking, if he owned a fortune 500 company, drove the finest car, and fathered 3 beautiful children with a beautiful woman he married…he could still not be fine. But that’s not his life. Research has proven many things about fatherless children but these nine things stick out the most:

He’s fine although his life has encompassed 2, 4, 5, 6, 7, and possibly 9. He’s fine. And women like my friend who owns her own real estate company, who is married to an amazing man, and is living the life she always dreamed are weak right? It must have been a fluke that she wasn’t searching for a father figure in every man she dated and ended up being successful/happy.

Ultimately what I am saying is that CHILDREN need their fathers equally. The same. Its not more important for a father to pull the son or daughter closer to give them the best possible life. It’s important for fathers to pull all of their children close. For a man to feel as though it is more important for him to be closer to his daughter than his son shows that there is a major problem that is saddening and disturbing as it relates to how black men view fatherhood. We, as parents, don’t know who our children will become. We can provide them with every piece of greatness we have and they will one day choose their own path. ESPECIALLY, when it comes to their future relationships. Newsflash every person who has gotten involved in an unstable or abusive relationship didn’t come from a “broken home” just like everyone who is successful didn’t come from a two parent home.  Why not still give our boys and girls the exact same in an attempt to shape their future positively? We must give them the same exact opportunity to be amazing.

To the parents that choose to be a little bit better to one gender of a child than to the other because they think one may possess more strength…. May your beautiful babies forgive you one day.